Mark details his extraordinary ride through England, Spain and France.

This is my second Exeter European Cycle Challenge. I enjoyed it so much last year I had to go again.

On a very wet Sunday morning the 30 strong group met at Sandy Park for the Grand Depart and day one of the 6-day event. We travelled up over Haldon Hill, along the route of the old A38 through Ashburton, Buckfastleigh, South Brent then across the Kingsbridge Road into Plymouth.

The Ferry arrived in Santander at midday on Monday and shortly after we began our ride along the coast from Gajon, Perdrana towards Santona. We peaked at just under 600 ft before descending on to the salt flats, and then on to the seaside town of Laredo. The rest of the day followed the old Bilbao coast road and featured two 500 ft climbs and a coast-hugging road past a stretch of rolling to Castro Urdiales. 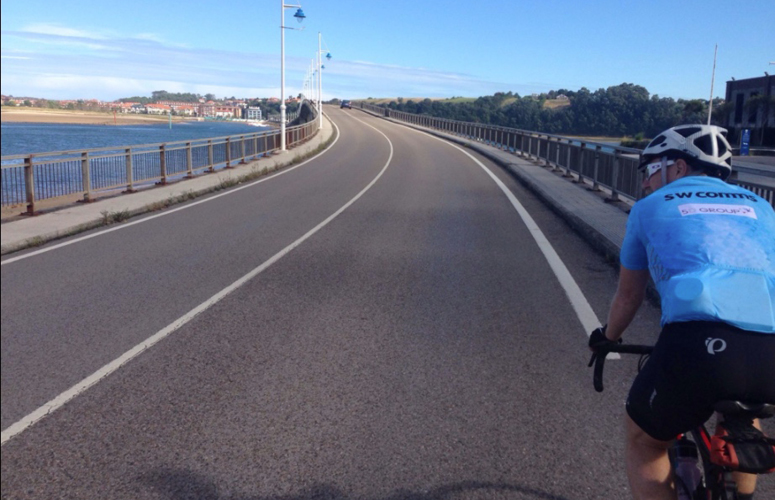 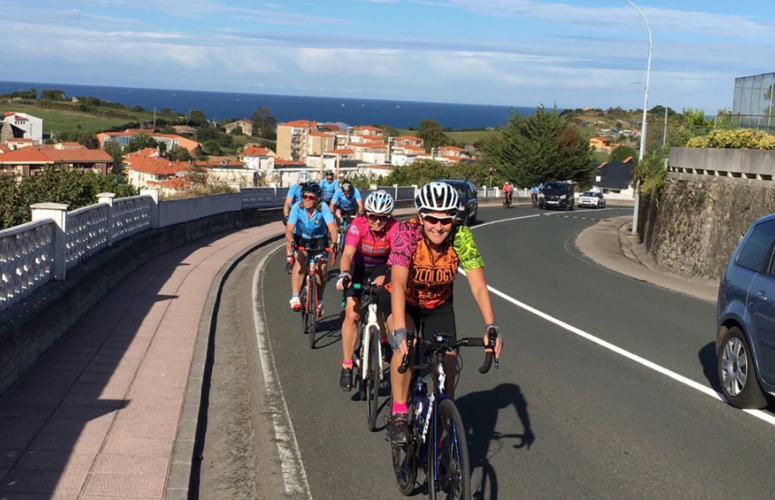 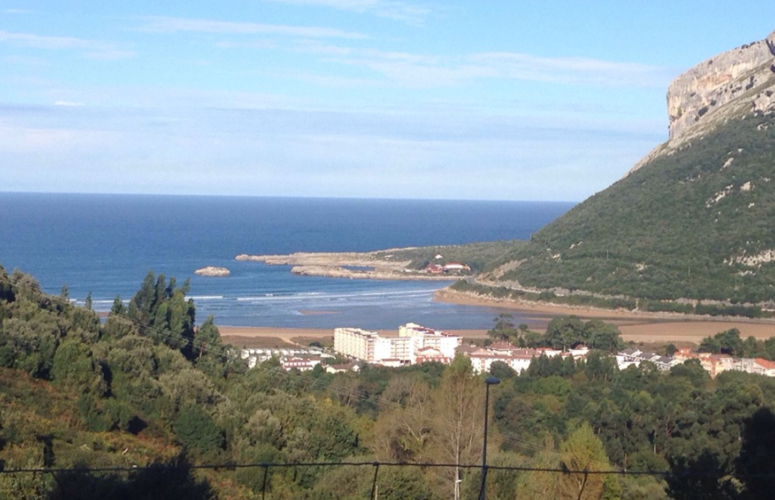 We travelled by bus for the overnight stay in San Sebastien and due to problems with the backup van, the start of this ride was moved forward. We began at around 750 ft above sea level and peaked at 2238 ft. This was the first proper climb of the trip at 1488 ft over 7.5 miles which we completed in just over an hour. The gradient was mostly 6-8% with a couple blips closer to 12%. A challenging, but satisfying climb, the first Col (mountain pass) of the trip and my first border crossing on a bike. The descent was slightly steeper than the climb and with a good surface and open corners provided an opportunity to rest the legs and have some fun for 10 miles.

Dorris stops are a central part of the Chiefs Euro Cycle Challenge and happen 3 times a day – usually. Our mobile feeding station was facilitated by the Chief’s executive coach and kindly provided by Tony Rowe. Arriving at a range of food and drink laid out and ready to be consumed becomes an increasingly anticipated break as the days and miles start to take their toll. The lunchtime soup and roll were my particular favourite and were a welcome break from the cake and glucose high energy food that make up the morning and afternoon stops.

The final Dorris stop was particularly enjoyable as we were positioned overlooking the river at Navarrenx in the foreground of the castle. From here it was a flat 35 miles to Pau. 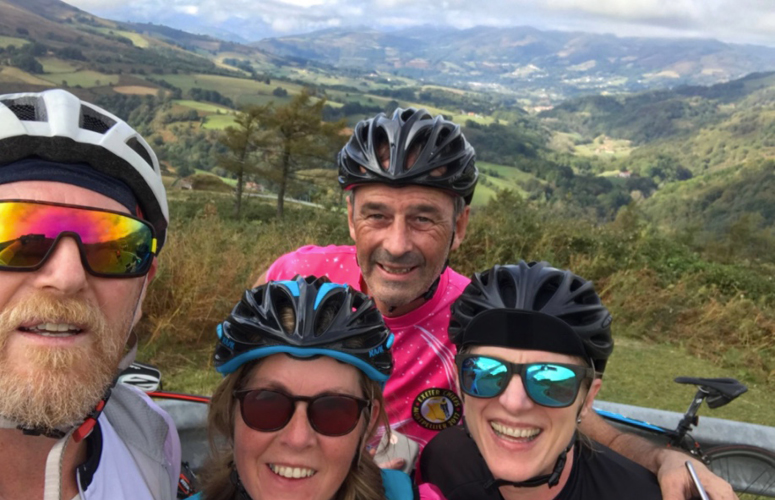 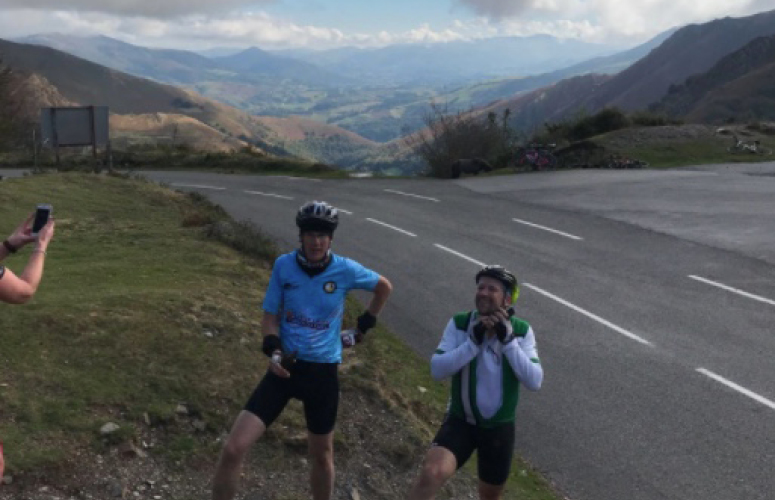 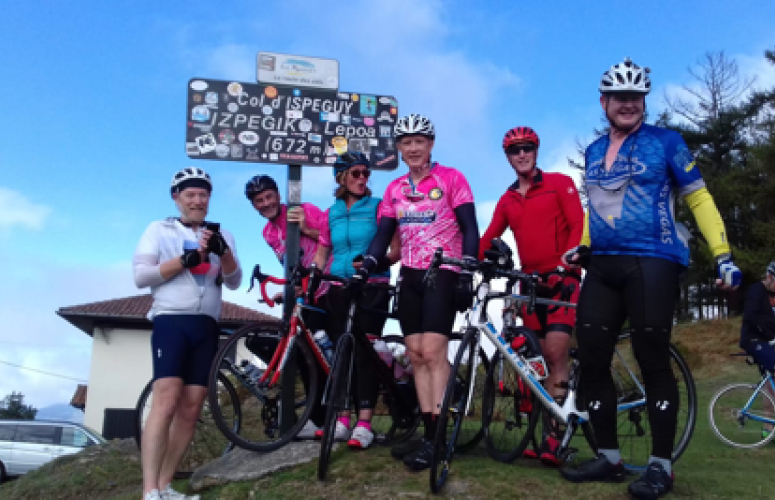 Today’s climb was the centrepiece of this year’s challenge. Starting at 715 ft above sea level peaking at 5551 ft 30 miles later. Riding out from the hotel – always the best way to start the day – the first 26 miles are mostly flat with a ‘small peak’ of 1500 ft at 15 miles.

The mountains of the Pyrenees gradually became closer and closer as we progressed along the valley floor to Laruns. From there the only way is up. Unbeknown to me at the time this was where my Strava auto paused and failed to restart. More on that later.

My experience of French climbs is that they rarely get as steep as those regularly encountered in Devon. However, the consensus among the group was that this would be around 2-3 hours of relentless climbing, so pacing your speed was going to be important.

The Col D Aubisque is 10.5 miles and 3831 ft of climbing. The climb is listed number 5 on the list of iconic Col’s of the Tour De France and the Strava KOM is listed at mind-boggling 48 mins. There have been 45 passages over the summit since 1947, making it the second most visited mountain in the race’s history.

I had been advised that the first third was steady, the next harder and the final section featured some steep sections. The plan was to go steady and save a bit for the later stages. By halfway I was already pushing into ‘just keep the wheels turning’ mode. Clearly, I had not done enough climbing prep for this. It hurt. After about 90 minutes I could see the coach parked a long, long way up, but I was relieved the end was in sight. The next milestone was the ski station, Gourette. Reinforcing the fact this was a long way up as was the site of European vultures circling below.

A left hairpin pointed me in the direction of the Dorris and another steeper section. Two French guys in a car had a laugh at my exhausted lung-busting and we exchanged a laugh. Later the laughter became more understandable. I was stopping every 10-15 minutes to allow my legs to recover. Steve and Andy who had been with me for the last few miles started to pull away, but I wasn’t that bothered, it was just about getting to the top.

Eventually, I rounded the corner to see the hotel where the Dorris was parked. Knowing that the end was in sight, my pace lifted from pitiful to almost respectful as I approached a strangely quiet car park. This was not the summit. To my right and 500 ft up and 4 miles ahead I could see some of the better climbers approaching the last section. The laughter of the French guys earlier came to mind, I think they knew what was coming.

It was time for a breather and a can of Coca-Cola before getting back on the saddle for the final push. This was when I realised that my Strava had not restarted at Larunz. All that effort and no record!

Around 2 hrs 16 minutes of cycling and I was at the summit. Knackered, but elated. Arriving in the middle of the pack, the reception for the quicker riders was uplifting and welcome. Dorris had the soup, rolls and drinks ready. Riders were posing for pictures lying on the grass enjoying the sunshine, resting and refuelling. Below we could see the remainder of the group coming up in small packs and a ‘welcome tunnel’ was formed to clap them in.

The downhill was very narrow with huge drop-offs to one side and rocks to the other, at least one tunnel, the inevitable surprise additional climb (19%, it hurt), then a 15-mile winding rejuvenating decent into the valley leading to Lourdes. Form Lourdes into Tarbes which included a race with the local cycle club consisting of members over 60. (We saw them off. I blame Murray. 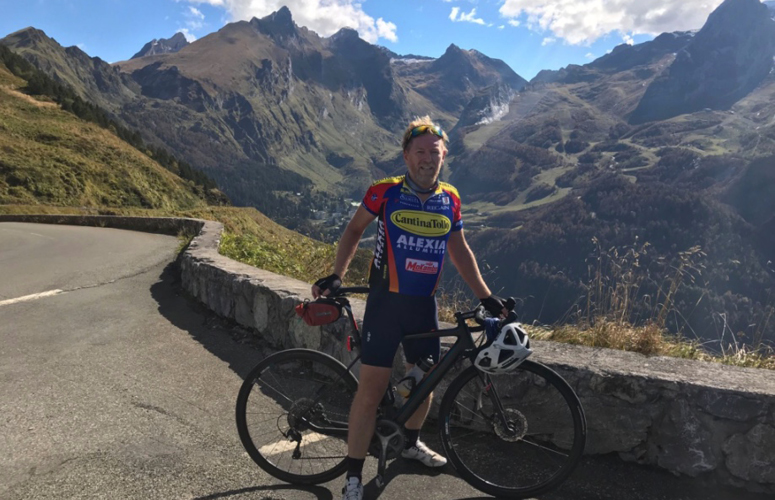 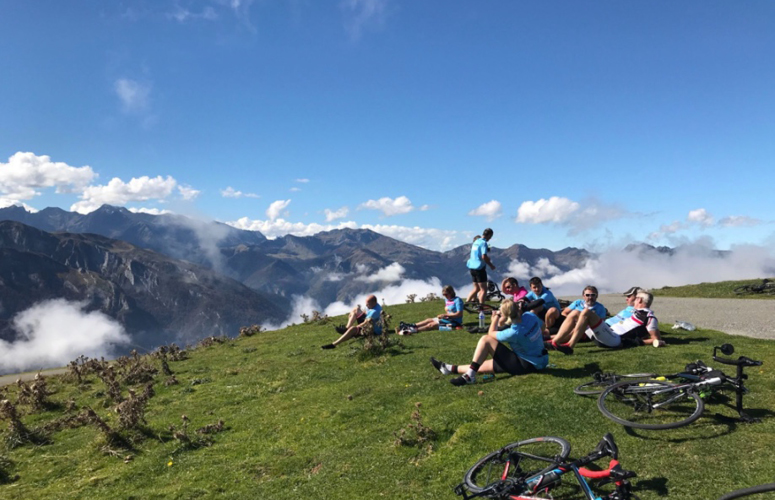 A 77-mile ‘recovery’ spin. We got caught up with the fast group in the morning. Luckily it was a very, very gradual climb of 600 ft over 23 miles to start, followed by a 4-mile descent into the L’Arize River valley and the incredible limestone cave where the river and road both cut through the cliff and emerge on the other side.

The remainder of the day was rolling hills through Palmiers-Mas d’azil to within striking distance. Unfortunately, we had to stop short of Carcassone due to the extensive flooding in the city which had lead to the loss of life. 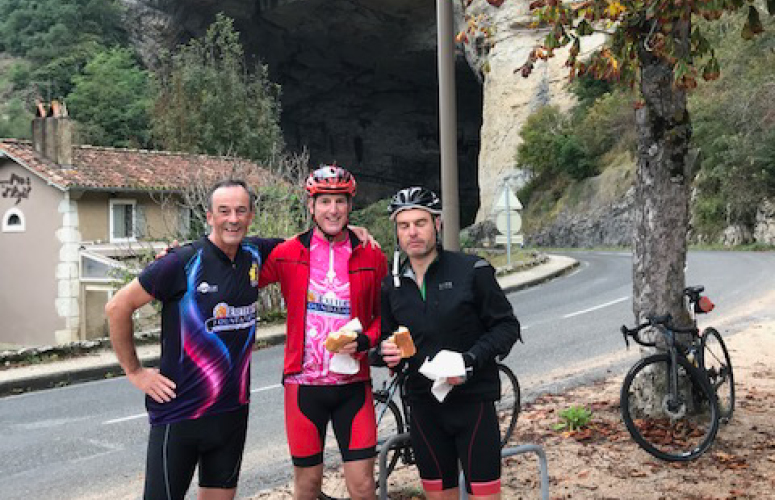 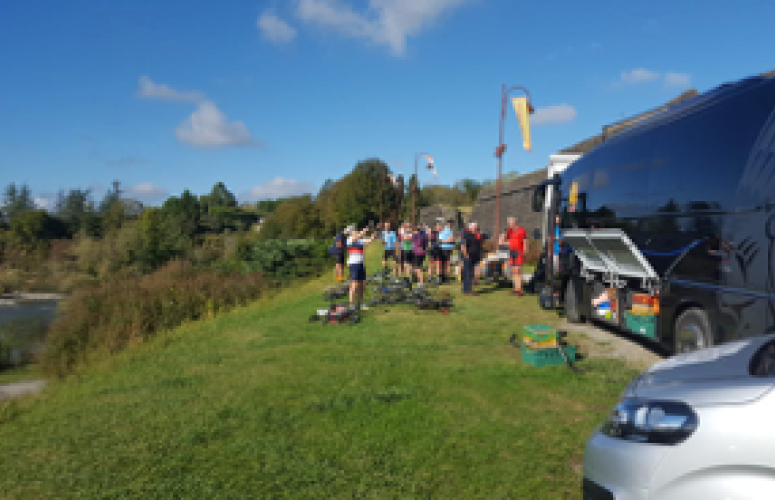 Day 6 Pic De Nore and on to Castres

The floods also affected our start on the last day, we decided to respectfully avoid travelling through the affected area and drove to the start of the assent of Pic De Nore. A mere 1211 metre climb over an estimated 11 miles. To be honest my hill climbing legs never really got going on this trip and I kept my pace to a very modest level.

14.5 miles later and an average of 8 mph I made it to the top. One of the last in the group, but I did it. The trip back down was just what I needed. The surface was pretty rough with mud, twigs, gravel, sharp bends, steep sections and potholes, but I had great fun chasing Paul and Bex to the bottom and making my only pass of Dawid, who had been nothing more than a distant blip for the rest of the week.

An hour or two later and we ready to convene for the group ride into Castre. Chiefs flag were out as we rode into town to the sound of a few toots from friendly locals and bemused looks from some drivers. 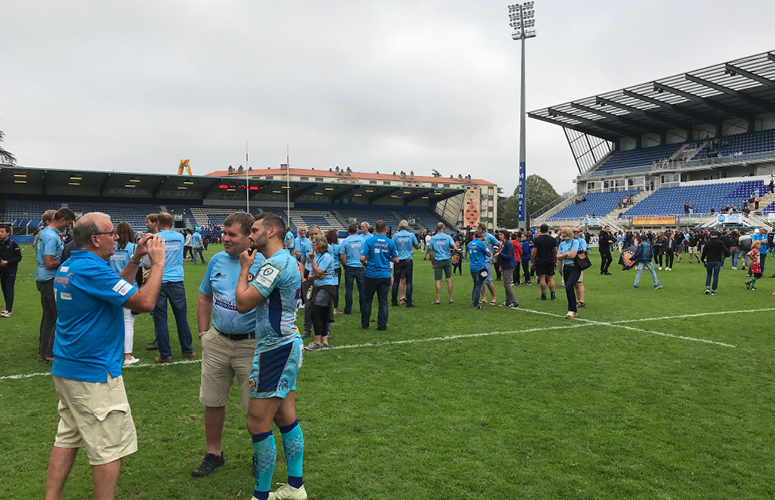 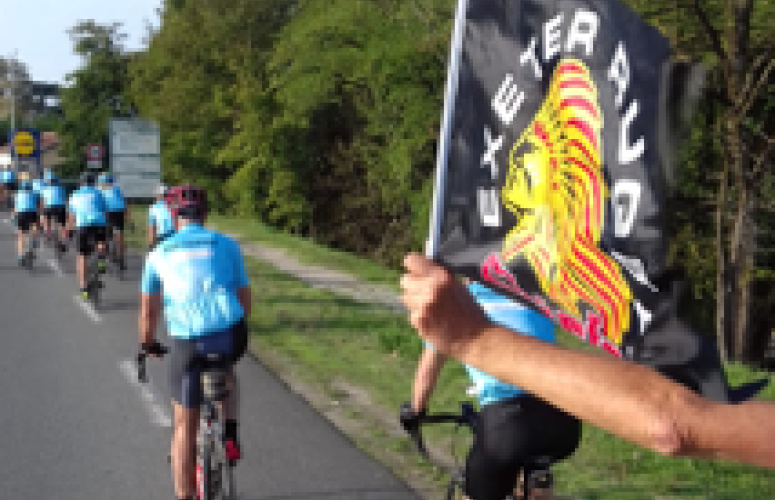 A van breakdown and severe flooding did cut us short of a few miles but I still feel chuffed with what was achieved by the group. I look forward to next years Exeter Chiefs European Cycle Challenge!